The ancient classic Laghu Parashari, whose authorship is not known, is a brief but important one dealing with the application of the Vimsottari Dasa dasa system in 42 verses divided into five chapters. We really hope you complete your journey and wish you luck.. 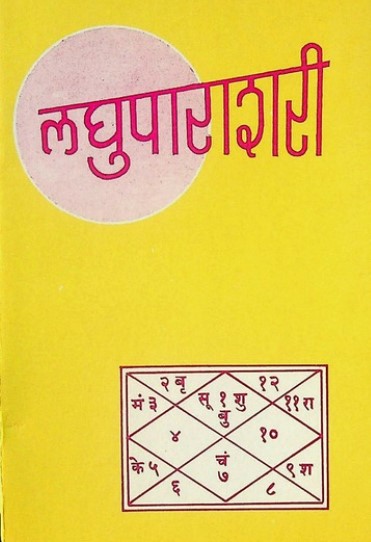 ️‍🔥1. We pray to Goddess Sarasvati who has red lips, who holds Veens (a musical instrument) in her hand; she is the real strength of Lord Brahma who is so greatly spoken of in the Upanishads.
️‍🔥2. For the enlightenment of the learned astrologers, I compose this Udu-daya-Pradeep on the basis of Parashara Hora-Shastra.
️‍🔥3. We will include the Astrological results (good or bad) of the Nakshatra Dasha Paddhati as shown in Vimshottari System; and do not believe in Ashtottari System.
️‍🔥4. The learned should make themselves familiar with the fundamentals of Astrology through other works. Here only the specific principles will be explained.
️‍🔥5. All the planets (beginning with the Sun) aspect the planets in the 7th House with a full sight; but Saturn aspects those in the 3rd and 10th Houses with extra ordinary Drishti, so does Jupiter aspect them in the 5th and the 9th, and Mars in the 4th and the 8th Houses with a full sight.

️‍🔥6. All the planets owning Trines, i.e. the 1st, 5th and 9th Houses by signs produce uniformly good results, whether they are benefics or malefics. If they own the Trick houses, i.e. the 3rd, 6th and 11th houses by signs, they are always disposed towards evil.
️‍🔥7. It is commonly believed that benefics (Jupiter, Venus, strong Moon and well associated Mercury) when they own Angles by sing i.e. 4th, 7th and 10th houses they give good results; but as per Laghu Parashari this will not be true unless they are lords of the Trines also simultaneously. The same way, according to the popular belief, the malefics (the Sun, Mars, Saturn debilitated or waning Moon and ill-associated Mercury) give evil results; but according to Laghu Parashari if they do not own Trishdai (3-6-11) houses, they do not give evil results and become progressively more and more powerful as lords of the 1st, 4th, 7th and 10th houses.

️‍🔥8. Lords of the 2nd and 12th houses are powerful not because of their own merit; they are greatly influenced in giving good or bad results by their association or position in the chart.

️‍🔥9. Lord of the 8th house (Randhresh) by virtue of being the 12th (Vyayesh) from the 9th (Bhagyesha) does not produce good results; but if he happens to be the lord of the Ascendant/Ascendant and occupies the 1st or the 8th house, he becomes benefic.
️‍🔥10. Amongst benefics the evil nature of Jupiter and Venus when they are lords of the Angles is extraordinary. If they own or occupy the Maraka sthana as lords of the Angles they become powerful killers.

️‍🔥11. Mercury has less of this evil nature as compared to Venus; the Moon has much less than that of Mercury. The same way the Sun and the Moon are not evil being Asthmesh (lord of the 8th).
️‍🔥12. (In Cancer nativity) Mars, a malefic, gives good results not being the lord of the 10th house only bu by being the lord of a Trine house 5th also.

️‍🔥13. Rahu and Ketu in spite of being in dignity, give good or bad results according to their position or association.

This brings to the end of Samajna Adhyaya..

️‍🔥14. When there exist mutual aspect and reception between the lords of angles and Trines and their second sign does not fall in any other house than Angles and Trines, they give extra ordinarily good Yoga Karaka results.

️‍🔥15. Lords of the powerful Trine and Angle, i.e. the 10th and the 9th houses, in spite of being lords of trik houses by their other signs, if have mutual aspect, reception or association, give good results.

️‍🔥16. The first of these relationship is considered superior to the 2nd which in turn is superior to that of the 3rd.
️‍🔥17. This gives rise to one doubt, whether the effects in all the Angular – Trinals will be the same or in any way varied. This point has been clarified in the succeeding Shloka.


️‍🔥18. Amongst the Trines, the 5th and the 9th houses are considered powerful and if, with the lord of either of these, the powerful lord of the angle, the 10th house, has relationship, then such a Yoga becomes most effective.
️‍🔥19. Now benefics give auspicious results even without any relationship during their Dasha. Whether the malefic will be instrumental in giving the Yogaphal even when they are related? Its answer is given in the succeeding Shloka.

️‍🔥22. If the Lords of the 9th and 10th houses are also respectively Lords of the 8th and the 11th, their relationship Lords is not conductive to any Yoga.
This brings to the end of Yoga Adhyaya.

1) Let We help you With Basic PDF notes for you

2) Let We help you With Advanced PDF notes for you

️‍🔥23. The 8th house from the Ascendant and the 8th from the 8th, i.e. the 3rd are the two houses of longevity. The houses related to death are the 12th from each of these. Thus the 2nd and the 7th are the Maraka houses.

️‍🔥24. Out of these two Marakasthanas (2nd-7th) the 2nd house is more powerful. During the ruling period of the Lords of the 2nd and the 7th, the malefics occupying them or associated with them, the death of the native is possible.

️‍🔥27. In the absence of the past Marakas the death inflicting agents may be traced to the succeeding Lords who may prove fatal in their major or sub-ruling periods.

️‍🔥28. If Saturn is ill-disposed and related to Maraka planets, he will be the first to inflict death over other plants.

This brings to the end of Ayurdaya Adhyaya

️‍🔥29. All the planets do not give good or bad results according to their Atmabhavanurupa during their own Antar in their own Dasha.
️‍🔥30. Dasha Nath (Lord of the Dasha) gives his own Dashaphal (effects of his Dasha) in the Antar of those planets who are (Sambandha Karta) related to him or are of like nature (the 9th) and give similarphal as that of the Dasha Nath.

️‍🔥31. Those Planets who give results contrary to the Atamasvabhava of the Dasha Nath the effects in their Antar are by adjustment between the two (Lords of the ruling period and those of the sub-period). (An admixture of good and bad effects is seen in the Antar of the Lord of Trishdai during the main ruling period of the Dasha Natu if they are unrelated).

This brings to the end of Dasha Phala-Adhyaya

️‍🔥42. In the same way if the Lord of the 9th and that of the 10th mutually exchange places, i.e., they are posited in each others house, they then form a Raja Yoga and such a native is blessed with name, fame and power.
This brings to the end of Misraka Adhyaya
Advanced Astrology: READ MORE
🏝🏝 Jaimini Sutram
🏝🏝 Tajik Neelkanthi
🏝🏝 Lal Kitab (original in 3 volumes)

There is no end to learning, and we should keep reading no matter how much we know. But still, a structure always helps a learner.. Please refer for more on remedies in astrology.

Contact Us—We will try to guide You whateverpossible | Small Fee Applicable
Email ID: care.jyotishgher@gmail.com
Contact No: By email only Due to busy Schedules